Sorry, Simon, you must have heard it wrong.  Not microscope Wi-Fi, maybe you heard microcell Wi-Fi.

The cnPilot e430H is a wall plate access point featuring a discreet and sleek design.

As a microcell wireless access point, the e430H will look great mounted on the wall in a hotel, dormitory room, long term care, hospital patient room or multi-dwelling unit.  It ships with a single gang mounting bracket that can be used in nearly every country in the world.  Optionally, you can purchase a dual gang bracket, a flush wall mount bracket, or a desktop stand for maximum design and aesthetics flexibility.  To create a manageable microcell for high density networking, the e430H can be managed by cnMaestro™ from the Cloud or On-Premises.  The cnMaestro management system automatically adjusts the RF operating parameters to avoid interference and select the optimal operating channel.  cnMaestro and cnPilot include seamless roaming that can leverage the cnMaestro for controller assisted roaming or exchange roaming information between access points for seamless roaming without controller interaction.

The e430packs a lot of enterprise grade skills into one small, wall mounted, network appliance. 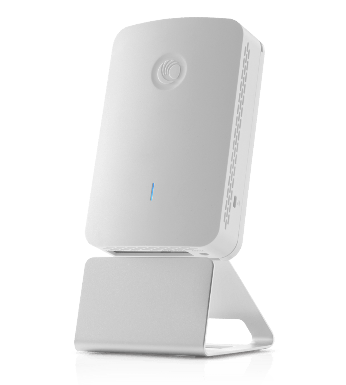 The e430H is a full network in a small box with four Gigabit auto-MDIX Ethernet ports and 802.3af PoE Out to power an external Ethernet device such as a VoIP phone, or even another access point!