The wild fires in California have been raging for months, destroying much of everything in their path. This tragedy has taken lives and damaged property, and only now are teams getting a full 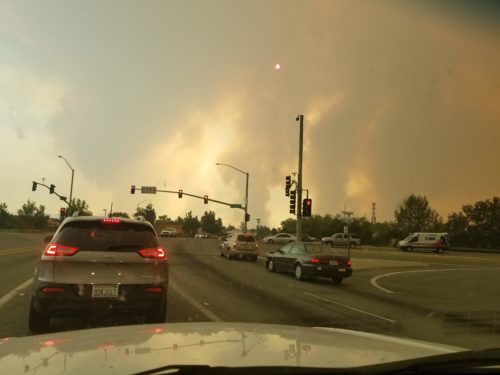 picture of the devastation. In the Carr fire alone, more than 1,200 homes were destroyed.

Many wireless ISPs throughout the state suffered tremendous fire related damage to their networks, and also suffered additional financial losses as many of their customers’ homes were burned to the ground. One such ISP is OmniLogic, located in Redding, California. As a result of the Carr fire, OmniLogic lost two towers completely, and a third was also severely damaged. Most of the DSL subscribers in the area have lost service as well, since much of the telephone company infrastructure was damaged. For a time, no one in the area had any service whatsoever.

As soon as Jonathan Resendez, the owner of OmniLogic, was allowed back into the fire damaged area, he immediately took action to not only repair his own network, but also to reach out to the community to offer badly needed connectivity wherever possible. With new equipment donated by Cambium Networks, he was able to be on the leading edge of the recovery effort, offering vital connectivity to connect aid agencies, first responders and families.

“For a month and a half, the air was so thick you could cut it with a knife,” reports Jonathan.

These images show how portions of his network were severely damaged and in some cases incinerated. Jonathan, along with the assistance of his 17 year old daughter Sienna, applied their skills to rapidly rebuild portions of the network and also to provide multiple community locations with free, public access Wi-Fi.  One such location was the annual Shasta County Mini-Makers Faire, which was scheduled to take place even though fires had recently taken out broadband services at the fairgrounds. OmniLogic was able to quickly deploy high capacity Wi-Fi services rapidly by utilizing Cambium Networks PTP 550 to deliver bandwidth to the fair venue along with cnPilot™ e700 Wi-Fi enterprise outdoor access points for public access during the event. Jonathan’s can-do spirit, coupled with hands-on ability and creativity exemplifies the spirit of the wireless ISP industry.  Jonathan reports that the link and Wi-Fi “work just fine.”

Recovery takes time. It will take years to rebuild what has been destroyed. It requires a strong resolve to focus on rebuilding. While people in California are grieving their losses, they are simultaneously working to rebuild. We are inspired by their determination, strength and character.